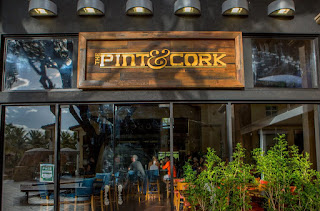 Although only open for two months (as of this writing), The Pint & Cork (TP&C) at The Shops at Wailea seems to be going strong. This is probably due to the venue being the only really decent place to watch sports in all of south Maui and that it's conveniently located next to shops husbands would rather not be dragged into.

Although the ten or so big screen televisions showing all sports all the time might beg for this place to be labelled a sports bar, the interior - with its 'tique wood and brick walls - speak to something more closely resembling a wine bar. In this regard, TP&C is probably one of the
most aptly named places you'll ever drink at. Featuring 16 taps on rotation (none of them particularly impressive if you drink at Maui Brewing Co. as often as I do, though MBC beers are offered here) and a respectable variety of wine, to say nothing of the cocktail menu, there is plenty to sate your thirst and for much less than what nearby hotels will charge. Are far as getting your drink on is concerned, TP&C pretty much has you covered. That is, unless you're a beer snob. Then you might want to try Monkeypod Kitchen just up the road.

Interestingly, TP&C bills itself as a gastropub. Well, maybe in Maui this is true but I haven't eaten anything at TP&C that I haven't found better somewhere else. Their garlic fries, for example, are indeed very garlicky but they pale in comparison to Gannon's Volcano fries down in Makena. The pork sliders? Much better from Horhitos Mobile Taqueria's food truck. The burger? Way better at 5 Palms closer to Kihei. I'm not saying the food is bad, just that there is better tasting food nearby. I should say, though, that the food is still pretty darn good and you'll pay a heck of a lot less than you would dining at the hotel restaurants which are over-hyped to put it mildly.

As for the atmosphere, it is friendly. The staff doesn't ignore you to nearly the same degree most
Maui food venues operate and for that I'm thankful. It should be noted that even at half capacity, TP&C is very noisy, so you might want to consider that before gently and quietly breaking up with your other half after they've spent entirely too much on a Coach purse next door. On a related note, TP&C does have a very small patio and a balcony area for a little bit more privacy. And, although I haven't been there for it, I understand TP&C is open to 2am(!) daily and features live music on Thursday, Friday and Saturday.

Walk over to TP&C from your hotel or pay for parking at the Shops which has been in effect for almost a year now. Free 1 hour parking. Parking validated if you make $25+ in purchases.


Directions: The Shops at Wailea are sandwiched between the Marriot and The Grand Wailea on Wailea Alanui Drive. TP&C is on the upper deck on the south side of the shops next to Tiffany and Co.